The Mythology of Yoga Poses

The mythology of yoga poses is wonderfully illustrated in these three enchanting myths about the experiences of mystical gods and deities in the classical texts of South Asian literature. The philosophy behind these stories inspires spiritual growth, enlightenment and self-development; while the asanas, or yoga poses, that are based on them lead to a healthy body and mind. Allow these colourful fables about the Warrior Sequence, the Monkey Pose and the Lord of the Dance to bring new life and meaning to your practice.

Once upon a time in ancient India, an unorthodox young god named Shiva fell passionately in love with a spirited young woman named Sati. Sati’s father, Daksha, was a hard-headed, egotistical man and fiercely disapproved of his daughter’s choice. Defying him, Shiva and Sati wed in a romantic ceremony and went to live among the majestic snow-capped peaks of the Himalayas.

To spite them, Daksha organized a grand and lavish ceremony in his palace, with glorious melodies of Vedic chants, fragrant garlands of jasmine, and sumptuous aromatic dishes made with the finest spices. He invited dignitaries, royals, gods and goddesses from near and far, but intentionally excluded Shiva and Sati.

Shiva was indifferent to his father-in-law’s self-centred antics and had no interest in the event. But Sati, determined to win her father’s respect, insisted upon attending without an invitation. Unfortunately, she arrived at the ceremony only to be faced with a tide of derogatory sneers and insults from Daksha. Overwhelmed with anguish, humiliation and pain, she resolved to no longer be associated with her earthly body. She sat down, retreated deep within herself and began to practice fierce yogic breathing, which violently ignited her inner fire and engulfed her body in flames.

Devastated and enraged by the news of Sati’s tragic death, Shiva ripped out his hair and created Virabhadra, a fiery gigantic warrior who carried terrifying weapons and embellished his body with snakes and skulls. Virabhadra dove into the ground toward the ceremony. Once there, he broke through the earth holding his sword above his head (Warrior I) and met Daksha’s frightened gaze. He then took his aim (Warrior II) and brought his sword down into a fatal blow (Warrior III).

Today, Sati is the term for the illegal practice of self-immolation. Although the associated myth seems dramatically violent and far from the inner peace and serenity that yoga promotes, the underlying message is very important. “Warrior Pose battles and wins focus. You see that there is no war within you. You’re on your own side, and you are your own strength.”Shiva represents the Higher Self; Sati represents the Heart; and Daksha represents the Ego with all its ramifications, such as anger, impatience, maliciousness and arrogance.

As human beings, we all fight spiritual battles with our egos. So practicing the Warrior Sequence is essentially practicing control and triumph over our own negative vibrations by virtue of our pure hearts.

From deep within the Dandaka Forest, the great King Rama’s wife, Queen Sita, was kidnapped by a savage demon and taken to the island of Lanka on a flying chariot. Brimming in anger, King Rama gathered his troops and executed a daring rescue mission. He called upon his most loyal devotee, Hanuman – a demigod who was part man, part monkey – to advance first, find Queen Sita and deliver a precious ring to reassure her that she will be rescued.

Hanuman raced to the south of India with incredible allegiance and dedication to his King, but abruptly came face-to-face with the impossible vastness of the sea. Doubting his own abilities, he dropped to his knees and prayed that he would somehow find the means to reach Queen Sita in time.

His prayers were answered and Hanuman was suddenly rejuvenated with incredible faith and a new determination to complete his mission. “It’s not the Yoga you do; its the courage you bring to your yoga practice that’s going to change your life.”He stretched forward and up with one leg and pushed back with the strength of his other leg to propel himself into a powerful leap across the sea, mightily landing on the tropical shores of Lanka. Without a moment’s hesitation, he advanced through the thick palm groves and found the greatly distressed Queen Sita losing hope of ever being rescued. But he presented her with the ring from King Rama and eased her worries once and for all.

Hanumanasana thus symbolizes bravery, devotion and physical strength in the face of self-doubt and fear of the unknown. It is truly, so to speak, a remarkable leap of faith.

Natarajasana
(The Lord of the Dance)

Among the lush jungles of South India, Lord Shiva the Destroyer disguised himself as a vagrant peasant and confronted a group of sages who were engaging in questionable practices. In the argument that ensued, the sages began to fight Shiva with weapons of ferocious beasts and deadly serpents. Eventually, a monstrous dwarf representing the twin vices of ignorance and arrogance was sent to challenge Shiva into battle. 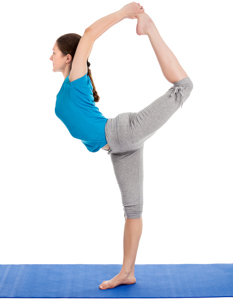 Shiva simply smiled and magnificently morphed into the form of Shiva Nataraja, encircled by a cosmic ring of fire signifying the cycles of birth, life, death and rebirth. With wild untamed hair sweeping around his head, ornamental jewelry adorning his body, and four expressive arms, he began to perform the Dance of Destruction. He balanced a drum whose beats symbolize creation in one hand; a flame of destruction in the second hand; the mudra of liberation in the third; and finally, the mudra of fearlessness in the fourth hand. “In the end, only 3 things matter: how much you loved, how gently you lived and how gracefully you let go of things not meant for you.”Shiva then calmly crushed the ignorant dwarf with one foot and elegantly lifted the other foot in a display of grace among chaos.

This best-known expression of Shiva Nataraja, within a ring of flames, was first created in bronze by the Chola Dynasty of Tamil Nadu around the 10th century C.E. In addition to being a prominent symbol of Indian culture, this form is a beloved image of Hinduism, Buddhism and Sikhism throughout the Asian subcontinent, Central Asia and South East Asia.

Now, when it comes to Yoga, the pose of Natarajasana nurtures level-headedness, self-control, humility, poise, class and contentment through the ups, downs and various challenges of life. It illustrates mastery over ignorance, illusion and arrogance. And on a deeper level, it means that you are not insignificant; you are a part of a greater undying dance of the universe that always will be.

Andrea is a teacher and lifelong practitioner of Yoga. Born in Thanjavur, Tamil Nadu, India, she now resides in Ontario, Canada and offers online classes in traditional Hatha Yoga. As the founder of Body Mind Light and its Etsy Shop, she strives to propagate the authentic, original wisdom of Yoga to the world. Read more...